Fiction: If Scott Dam and Cape Horn Dam are removed there will be more cold water available for salmonids on the Mainstem Eel River. 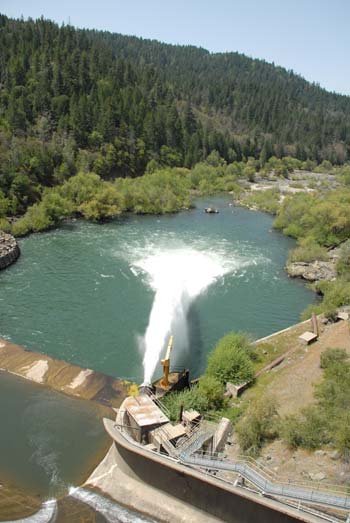 The Friends of the Eel River suggested in their petition to the SWRCB that removal of both dams would result in colder water being available for salmonids. Exactly the opposite is true. If the dams were removed on the Mainstem Eel River there would not be any cold water in the upper Mainstem Eel River in the summer, and summer flows would be naturally reduced to very low levels. The watershed above Lake Pillsbury is the driest section of the entire Eel River basin. It is basically a rain-driven watershed. There is snow, but not like in the watersheds of the North and Middle Forks of the Eel River which are predominately snow melt driven. The natural flows of the Mainstem Eel River above Lake Pillsbury are reduced to very low cfs in the summer, and early fall, on a normal rainfall year - even worse on dry years. If Lake Pillsbury didn't exist there would be no place to store winter runoff for release in the summer. Only snow above 5000' lasts past the winter months to feed the river system. The Middle and North Forks of the Eel River naturally run for a longer time into the summer with significant, colder water from snow melt. However, even these forks of the Eel River will have lethally warm water by the middle to end of summer (Kubichek, 1977).

Another important point, ignored by the Friends of the Eel River, is that the water released from Scott Dam in the summer is released from the base of the dam through the needle valve. This is the coldest water available on the Mainstem of the Eel River in the summer. Before predatory pikeminnow became established in the Mainstem of the Eel River, the section of river between Scott Dam and Van Arsdale was considered to be an extremely productive summer rearing habitat for juvenile steelhead (Potter Valley Project Monitoring Program (FERC No. 77, Article 39), Effects of Operations on Upper Eel River Anadromous Salmonids, Final Report Section 5.8, March 1998, Steiner Environmental Consulting). Shapovalov (1945) characterized the section of river between the dams as the most productive stream section in California. But, even this very cold water eventually reaches the ambient temperature as it flows down the river, and not far below Van Arsdale Reservoir lethal temperatures are reached in the summer months. Kubicheck (1977) notes that because of the low flows, some pool temperature stratification occurs below Van Arsdale Reservoir. Stratified pools have cooler water in the deepest parts of the pools which provides some habitat for over-summering juvenile steelhead. Kubichek (1977) also stated that higher flows in the summer time would cause mixing of the temperature layers in deep pools thus eliminating the cool water refugia for juvenile steelhead. This was a serious concern of CDFG during the years of discussions leading up to the FERC Final Order.