History of the Potter Valley Project

In 1905, Mr. W.W. Van Arsdale of San Francisco had a plan. The city of Ukiah and surrounding areas needed a reliable source of electrical power to replace a small coal-burning plant. Mr.Van Arsdale envisioned an electrical power plant that could be built at the north end of Potter Valley powered by water that would be diverted from the Eel River. The vision was inspired by his knowledge that the Eel River was an impressive 475 feet higher in elevation than the valley floor in Potter Valley. A simple exercise in physics, some knowledge of construction and financial backing was all he needed. 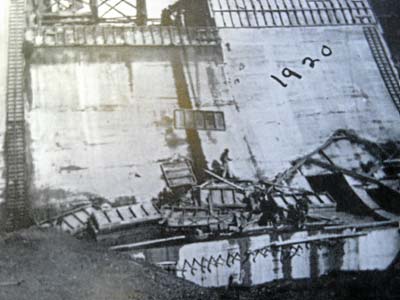 Eel River Power and Irrigation Company proceeded to build a small dam on the Eel River. Cape Horn Dam, a concrete gravity and earth filled structure, backed up the Eel River to form a small reservoir called Van Arsdale. This reservoir serves as the forebay for the diversion tunnel. From here, an 8' diameter tunnel, lined with redwood timbers, was dug over a mile long south through the mountain, finally opening into the north end of Potter Valley, where water flows through a penstock dropping over 450 vertical feet into the Potter Valley Powerhouse. As the project continued it required more capital investments and the Eel River Power and Irrigation Company was reorganized as the Snow Mountain Water and Power Company in 1906.

Work was stopped for a period of time after the great quake of 1906 when the crews were needed to help in San Francisco. Finally, April 1, 1908, the project began to produce power. The first two units in operation were each 2,000 kilovolt-ampere. In 1910 the power company added a 3,000 kva unit. In 1912 a second penstock was constructed. In 1917 a final 2,000 kva unit was installed and the total capacity of the powerhouse grew to 9,400 kva (9.4 megawatts).

The Potter Valley Powerhouse was a boon to the Ukiah area with only one small downfall. The powerhouse only ran at capacity after late fall rains and into spring because the Eel River, like most of our north coast rivers, naturally gets drier and drier as the late spring rains end and summer begins. In the summer, there was not enough water in the river to run the powerhouse! Early on, in 1908, a plan was studied to build a reservoir near Gravelly Valley, twelve miles upriver from Van Arsdale, to store winter runoff and release the stored water to produce power in the summer. The first attempt to build the dam was abandoned. However, Snow Mountain Water and Power Company began the application process for a power permit again in 1918. By 1920 they acquired a Department of Agriculture Power permit to build a dam. Construction of Scott Dam, a cyclopean concrete ogee gravity structure, began right away in 1920. The Federal Power Commission (precursor to the Federal Energy Regulatory Commission (FERC) which now licenses the Project) granted a 50 year license for the project on April 15, 1922. Scott Dam was completed, and Lake Pillsbury began to fill, in 1922. Scott Dam and Lake Pillsbury were named after two of the principal investors in the project. In 1930 Pacific Gas and Electric Company (PG&E) acquired the Project from Snow Mountain Water and Power and assumed the license. 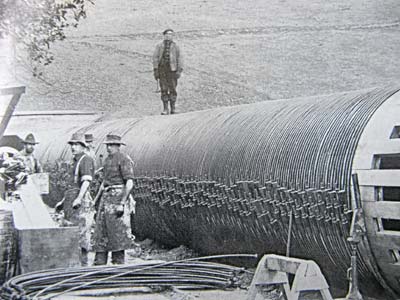 The original redwood penstock for the power plant.

The watershed above Scott Dam is 289 square miles, roughly 7.3% of the Eel River's total 3,971 square mile watershed. Originally the lake's capacity was 86,785 acre feet. Today, after sedimentation, the lake capacity was recently (2006) measured by the PG&E to be 74,993 acre feet when the lake is full to the top of the spillway gates. The dam's spill crest is 1,900.0 feet elevation. A series of radial and slide gates brings the possible storage height to 1,910.0, but the California State Division of Dam Safety requires the storage levels to be maintained at very precise levels based on time of year, forecast storms and snow pack. The spillway capacity of Scott Dam is 66,000 cubic feet per second (cfs). (the spillway capacity at Cape Horn Dam is 109,000 cfs). Lake Pillsbury is a relatively shallow lake with a surface area of about 2,280 acres. In a wet winter the capacity of the lake can be filled and spilled as many as 8 to 9 times.

Ongoing Licensing for the Potter Valley Project, and concerns for fish

The Potter Valley Project (Project) was first licensed as a hydroelectric power plant in 1922 by the Federal Power Commission. The original 50 year license expired in 1972. From 1972 until 1982, the Project was operated with a license that was granted annually while discussions regarding the operation were undertaken by PG&E, FERC, Fishery Agencies and stakeholders. In 1978 a Final Environmental Impact Statement (EIS) was issued by FERC. Several years of discussion ensued until, in 1983, the Project was relicensed for 50 years (from the original expiration date of 1972). The 1983 settlement agreement was signed by PG&E, California Department of Fish and Game (CDFG) and the counties of Humboldt, Mendocino and Sonoma. Part of the new license was Article 39 which required a 10 year study be undertaken to determine what the new Project flows impact was on salmon and steelhead and to adjust them accordingly. A Fisheries Review Group (FRG) was formed which consisted of scientists from PG&E, U.S. Fish and Wildlife Service (FWS), CDFG and the National Marine Fisheries Service (NMFS). In March of 1998, after ten years of studies the FRG completed their findings, and a report was filed with FERC recommending flow modifications. FERC began their EIS process. Over the next year two other entities, including the Round Valley Indian Tribes (RVIT) and the Sonoma County Water Agency (SCWA), submitted proposals for minimum flow releases to FERC. FERC held public scoping meetings and many organizations, municipalities, water districts, environmental groups and governmental agencies joined as interveners in the process. A Draft EIS was completed by FERC in February 1999. After further public meetings, many comments, additional proposed alternatives and new modeling inputs, FERC issued their Final Environmental Impact Statement in May 2000.

The FERC recommendation was based predominately on the FRG proposal prepared by the scientists with the most history and knowledge of salmon and steelhead populations specifically in the section of Main Stem of the Eel River impacted by the Project. The resulting complex flow regimes were calculated in such a way as to make the Project nearly invisible to the environment by releasing flows below Cape Horn Dam to mimic natural flows as closely as possible.

After a lengthy Section 7 Consultation between NMFS, PG&E and FERC, under the Endangered Species Act, NMFS produced a Biological Opinion and Reasonable and Prudent Alternative (RPA) for the Project flows and submitted it to FERC in November, 2002. The NMFS RPA generated extensive discussion between the agencies and stakeholders that had been involved in the license amendment proceedings since 1983. Ultimately, FERC issued a Final Order Amending the License for the Project January 28, 2004. The Project license expires April 14, 2022.

Salmonids on the Eel River

The Eel River salmonid populations have been impacted by many natural and human caused events over the last 160 years including the 1955 and 1964 floods, commercial fishing, road building, logging, introduction of predatory fish, other natural predators and changing ocean conditions. The environmental impact of the Project has been studied for 38 years. The impacts of the Project have been adjusted, using scientific observation and complex modeling, to assure that the flows below the Project are as close to natural as can be attained. 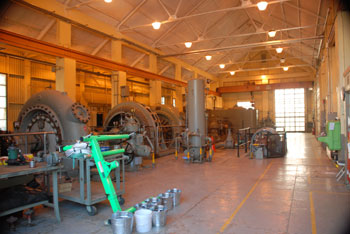 The value of the Project for power production is not insignificant in a world where green, renewable power is valued. Nine megawatts is enough to power the nearby city of Ukiah with locally, sustainably produced electricity. The value of the Project for water supply is nearly immeasurable. The quality of life for over 500,000 people who live in the communities and cities downriver from Potter Valley has evolved and improved with the existence of the water from the Project for over 100 years. Agriculture, the lifeblood of the economy of Mendocino and Sonoma Counties, thrives with the existence of this water. Recreation at Lake Mendocino, and down the Russian River, is dependent upon the Project. A community has grown near the shores of Lake Pillsbury and the economic value of this community and recreation in Lake County is important to their economy as well. The water from the Project is also released from storage in Lake Mendocino and used to enhance spawning migration flows for endangered salmonids in the Russian River. A riverine ecology, and the economy of Mendocino and Sonoma Counties, has evolved with the existence of the Potter Valley Project diversion for over the past 100 years.